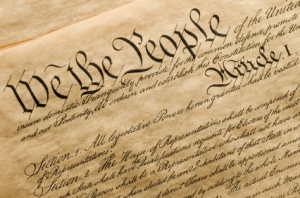 Federal employees, Representatives, Senators, judges, political appointees, and the President and Vice President of the United States take an oath of office. So what does taking an oath mean? Why even do it?

The reason is simple – public servants are just that – servants of the people. After much debate about an Oath, the framers of the U. S. Constitution included the requirement to take an Oath of Office in the Constitution itself. Article VI of the Constitution says “The Senators and Representatives before mentioned, and the Members of the several State Legislatures, and all executive and judicial Officers, both of the United States and of the several States, shall be bound by Oath or Affirmation, to support this Constitution; but no religious Test shall ever be required as a Qualification to any Office or public Trust under the United States.” The Constitution does not prescribe the actual text of the Article VI oaths. For federal civil service employees, the oath is set forth by law in 5 U.S. Code § 3331, which reads as follows:

“An individual, except the President, elected or appointed to an office of honor or profit in the civil service or uniformed services, shall take the following oath: “I, ___, do solemnly swear (or affirm) that I will support and defend the Constitution of the United States against all enemies, foreign and domestic; that I will bear true faith and allegiance to the same; that I take this obligation freely, without any mental reservation or purpose of evasion; and that I will well and faithfully discharge the duties of the office on which I am about to enter. So help me God.””

The Oaths are relatively straightforward, but what do they mean? I see the oath as having 3 important aspects. First, the employee swears to support and defend the Constitution against enemies. Second, s/he swears allegiance to the Constitution. Finally, the employee promises to do his/her job well.

One thing that federal workers often hear is a career supervisor or political appointee talking about loyalty to the agency or the boss. One purpose of the Oath of Office is to remind federal workers that they do not swear allegiance to a supervisor, an agency, a political appointee, or even to the President. The oath is to support and defend the U.S. Constitution and faithfully execute your duties. The intent is to protect the public from a government that might fall victim to political whims and to provide a North Star – the Constitution – as a source of direction. Other laws have been enacted that support that view. For example, in 1939, Congress passed and President Franklin D. Roosevelt signed the Hatch Act. We call it that today, but the actual name of the law is “An Act to Prevent Pernicious Political Activities.”

The Oath does not remove ambiguity and it is not always easy for an employee to know what to do. Here are a few examples:

Federal workers are accountable to the people, not to politicians. Whether an employee was a Trump supporter or Clinton supporter, a supporter of another candidate, or someone who chooses not to vote at all is not relevant to the oath of allegiance to the Constitution. Nor is it relevant to the promise to do a good job. Most federal employees are highly professional. They understand their oath of office and take it seriously. Even though many political appointees in every Administration do not recognize the professionalism of federal workers on the day they take their own oath of office, as their experience with federal workers increases, they typically begin to recognize the vital role federal employees play.

One thought on “The Oath of Office and What it Means”