“There’s a world of difference between insisting on someone’s doing something and establishing an atmosphere in which that person can grow into wanting to do it.”  Fred Rogers (of Mister Rogers’ Neighborhood)

Agencies are releasing their 2014 Federal Employee Viewpoint Survey (FEVS) results and many of them are not pretty. Here are results from a few agencies:

Looking at DoD as an example, the results for 2014 are lower than those for 2013 for more than half of the questions. The numbers in other agencies are not much better.  The FEVS questions cover a wide range of issues, but the ones that concern me most this year are those regarding agency leadership. Saying they are not pretty is an understatement. Here is how they look in agencies that represent 65% of the Federal work force: 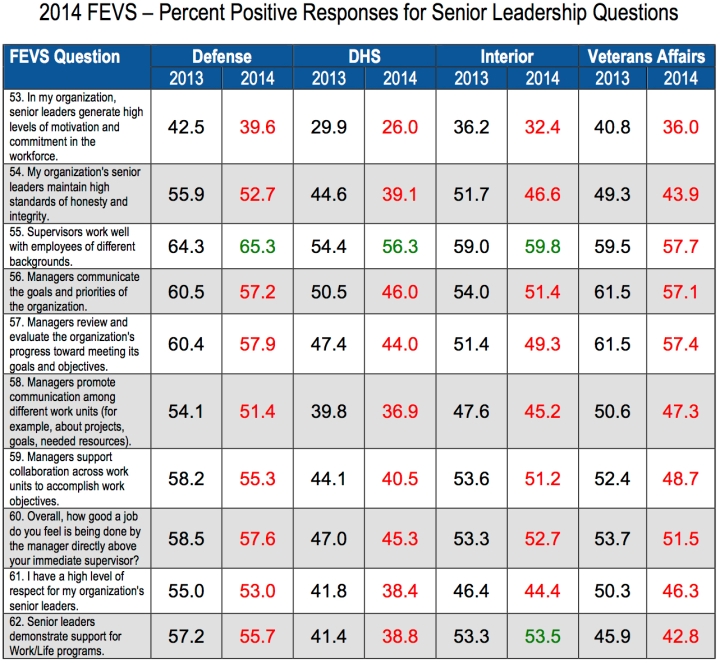 These numbers might lead someone to conclude that employees simply have poor opinions of their bosses, but the FEVS also includes questions regarding how employees view their supervisors and those numbers are significantly better. For example, the question “Overall, how good a job do you feel is being done by your immediate supervisor?” got the following positive responses:

Some of the difference can be attributed to familiarity. Employees see and talk with their supervisors every day, but may rarely (or never) have a conversation with higher ranking leaders. Regardless of the reason, the fact is that employees are reporting they do not have great trust and confidence in their leaders and the numbers are heading in the wrong direction. Some of the numbers are shocking. Only DoD was able to muster more than 50% positive responses for “I have a high level of respect for my organization’s senior leaders” and “Managers promote communication among different work units.” None of the agencies broke 60% on “Managers communicate the goals and priorities of the organization.” Think about that. How can an employee work to accomplish the agency’s goals if managers do not communicate what they are? Do we expect them to just stumble blindly into accomplishing them?

Not knowing where the agency wants to go is just one of the consequences of the trust and confidence issues the FEVS reveals. Mister Rogers was right – we have to create an environment where people want to work. A workforce that does not think much of its leaders can be pushed only so far. It will eventually have problems with productivity, recruiting high quality talent, customer service and other factors that are driven by employee engagement. Trust and confidence in leadership can also be a leading indicator that presages drops in other FEVS questions. If this trend continues, it is likely to drag all of the results even farther down. At some point, maintaining morale and productivity will become increasingly difficult. The downward spiral has to be stopped soon. Stopping it will take concerted actions by the key players. Here are a few ideas that should be considered.

Unless agencies begin to take steps such as these, it is unlikely we will see significant improvement in FEVS scores. They will continue to fall and the downward spiral will continue until the Federal government becomes a toxic workplace. We cannot afford to let that happen.

3 thoughts on “Federal Employee Viewpoint Survey: The Price of Mistrust”