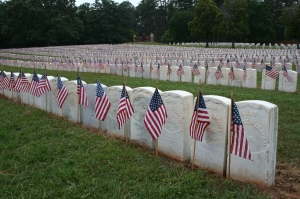 Memorial Day is one of those holidays that does not seem to be fully understood by some folks. For some it is the unofficial start of the the summer vacation season; for others it is the day when traffic in Washington, DC begins to lighten up for a few days. Some think of it as the day the Indianapolis 500 is run. Others think of it as a time to thank veterans for their service.

It may be all of those things, but Memorial Day has a greater and far more important purpose. At the end of the Civil War, families, friends and grateful citizens began decorating the graves of fallen soldiers. The commemoration of their sacrifice evolved into what we know today as Memorial Day. The act of decorating the graves with flowers and flags is so central to the day that in many parts of the country Memorial Day is still called “Decoration Day.” Whatever you call it, Memorial Day is intended as a time to recognize the sacrifice of military personnel who died in service to our country.

The original Memorial Day Order, signed by the Commander in Chief of the Grand Army of the Republic in 1868 says it best:

“We should guard their graves with sacred vigilance. All that the consecrated wealth and taste of the nation can add to their adornment and security is but a fitting tribute to the memory of her slain defenders. Let no wanton foot tread rudely on such hallowed grounds. Let pleasant paths invite the coming and going of reverent visitors and fond mourners. Let no vandalism of avarice or neglect, no ravages of time, testify to the present or to the coming generations that we have forgotten, as a people, the cost of a free and undivided republic.

If other eyes grow dull and other hands slack, and other hearts cold in the solemn trust, ours shall keep it well as long as the light and warmth of life remains in us.

Let us, then, at the time appointed, gather around their sacred remains and garland the passionless mounds above them with choicest flowers of springtime; let us raise above them the dear old flag they saved from dishonor; let us in this solemn presence renew our pledges to aid and assist those whom they have left among us as sacred charges upon the nation’s gratitude—the soldier’s and sailor’s widow and orphan.”

While we spend time this holiday weekend with our friends and family, let us not forget what Memorial Day is all about and the supreme sacrifice made by those men and women who are no longer among us.